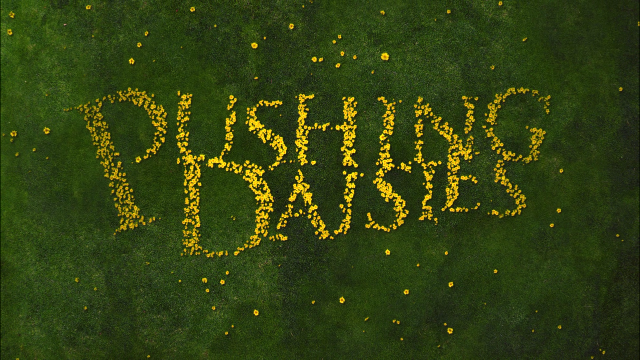 By the time you reach the fourth episode of a television show, it’s a safe bet that you’ll have finally decided whether or not that show is for you. If you weren’t turned off by the pilot all together, or enjoyed it with some reservations, those next three episodes give you a chance to see if the show can retain the things you liked about it and worked through its growing pains. That’s been my guiding principle for many shows, born out from experience – The Borgias‘ fourth installment managed to reignite my interest after earlier installments cooled it off, and The Killing‘s lackluster fourth episode prompted my desire to cut the show out of regular rotation.

More than that, the fourth episode is usually the point at which the creators of a show have begun to realize the strengths of the format and cast, and you get a burst of confidence that the best shows know how to capitalize on. It’s not uncommon for some shows around this point in their run to clear out early plot points, and set new ones in motion that could drive the entire season if you’re more focused on serialized storytelling. In their respective fourth episodes, Deadwood killed off of one of its main characters and in the process illustrated how the camp was very much a living organism, Rubicon realized it would be a much stronger show when it focused on characters over conspiracy, and Justified used up the last of its Elmore Leonard plot lines and went on to invest itself more heavily in the doings and residents of Harlan County.

So four episodes in, how do we feel about Pushing Daisies? Still completely, unabashedly in love with it. It’s not an unconditional love by any means – the problems I mentioned earlier with the Ned-and-Chuck relationship continue, as well as the fact that the show will always walk a tightrope between fantastical and twee – but from both a critical and personal perspective watching these four episodes (or rewatching in this case) has been a real treat.

As a fourth episode, “Pigeon” doesn’t feel definitive as some of those earlier shows I mentioned above, but there’s certainly indications that the show’s much more comfortable in its rhythms and is willing to spread its wings – ironically, doing so by cutting off a carrier pigeon’s wings and crashing a plane into an apartment. This series of events taking place right outside the Pie Hole piques Emerson’s business interests, and he ropes Ned into investigating the death on behalf of the pilot’s widow. Unfortunately for Ned, the case has also introduced a complication in the resident of the apartment, and Chuck’s sympathy for his plight – made even worse by the fact he’s able to hold her hand without gloves.

What’s really noticeable about this episode is how vast in scope it feels. Earlier episodes, even when they explored new settings, still felt somewhat limited to the familiar grounds of the Pie Hole, Chuck’s aunts’ house and the morgue. This one by contrast feels incredibly wide, taking us onto the Pie Hole sidewalk to a Burton-esque prison graveyard to a sweeping CGI span through a field of retired windmills (where, as Olive points out, there ironically doesn’t seem to be any breeze). Even in little scenes, such as the end of the show where the camera pans back to show three layers of the Pie Hole, the whole thing feels somewhat bigger, as if it’s also sporting some bejeweled wings and wants to spread them across the land.

And the case of the week too also feels somewhat wider in its focus, since we’re spending more time on our prospective murderer, one “Lefty” Lem (Dash Mihok), who continues the trend of quirky antagonists by being a white-collar criminal who lost his right arm to a paper shredder. First introduced as the inhabitant of the apartment the plane crashed into, then as a possible romantic rival for Ned, then a treasure hunter facing an uncertain future, he really does feel like more of a character than the Chinese Confederate or dummy-masked executive of earlier episodes. And his backstory – tied to a massive diamond heist, and a tragic love affair between his cellmate and a woman devoted to the life of windmillery – even manages to make him something of a romantic hero by the end, a nice change to the almost saccharine reaches of Ned and Chuck’s relationship.

And while the show’s spreading its narrative scope, there’s also a sign that it’s tightening up in certain ways. Immediately prior to starting the case, we get a scene outside the Pie Hole where the titular pigeon has crashed into a window, and it serves as a solid excuse to put all four of its main cast together. Most great shows tend to work better the more they put their players together, and Pushing Daisies has a plethora of flavors to offer. Emerson’s disgust at Olive holding a dead bird (“It’s swimming with disease and you serve food!”), Olive’s unabashed joy at seeing the pigeon revived* (“It’s swimming in miracles, not disease!”), Chuck’s thinly veiled plea to Ned not to touch the bird again, Ned’s frantic shooing of a nearby squirrel who could be in random proximity after the minute’s up – every piece contributes something, and the show would clearly be richer for more of these going forward.

*Ned’s power used unintentionally is fast becoming one of the show’s highlights. Used as a throwaway gag in the last episode it’s actually what drives the episode’s B-plot going forward, and the mortified look on his face when he realizes what happened is never not funny. 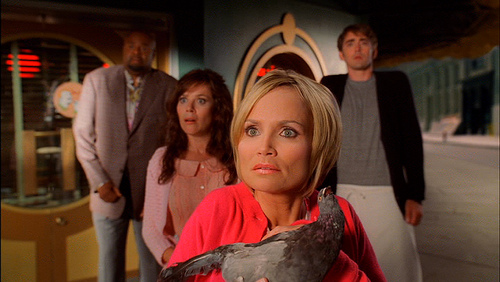 And several towns over, the show’s also working to tie Lily and Vivian more to the main story. Olive’s continued interaction with the aunts, and their continued ingestion of Chuck’s mood-elevating pies, means they’re feeling better and getting more reasons to be involved in the plot. Swoozie Kurtz continues to play the embittered role well, but Ellen Greene – whom I did not realize until this rewatch was also Audrey in the film version of “Little Shop of Horrors” – is truly a joy to watch in this episode. From her unexpected giggle at a joke of Olive’s to the borderline horrifying revelation that she and Lily taxidermy all of their dead birds and put them right back in their cages, to the quaver in her voice when she considers leaving the house, to her utter directness when she finally does (“Young people depress Lily because she’s afraid of dying” she says with her sister right next to her) everything she does here just puts a smile on my face.

And given their pedigree, it’s unsurprising that Olive and Vivian are the instigators of our next musical number, this one a backseat duet of “Birdhouse in Your Soul” from They Might Be Giants. I’m a little less high on this one than I was on “Hopelessly Devoted” from two weeks ago, partially because in context this one’s fairly telegraphed as Olive suggested Vivian should hang such a birdhouse and fill it with her memories of Chuck. The singing – like everything else on this show – works when it feels organic, and compared to the first one it feels rather shoehorned in. Still, Chenoweth and Greene have terrific singing voices, the cover’s appropriately upbeat and bouncy, and the disgruntled look on Lily’s face is perfect for the situation, so I think it all evens out in the end.

Obviously, this episode worked for me. How about the issues I mentioned with the show in last week’s installment? Well, on one hand they’ve certainly done better with the young Ned flashbacks, as this one explains how Ned and Digby came to be reunited after he was shipped off to boarding school. Maybe since it was my childhood pet, I’m just completely in the tank for anything featuring a golden retriever, but this segment showing Digby on his noble quest and channeling “Homeward Bound” with a twist when the two are reunited just worked for me so well. It also helps that the issue of the two not being able to touch – and realizing that being together in some way is good enough – ties well with both Ned and Chuck’s relationship and the blooming affair between Lem and windmill owner Elsita. 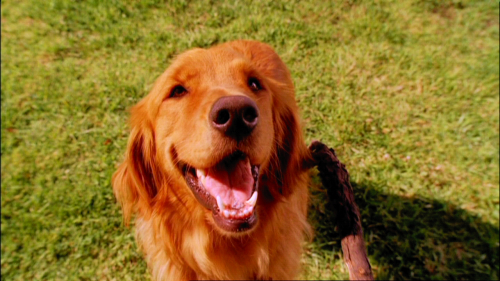 As to the former relationship, I’m still not entirely sold – and my disillusionment with the Ned/Chuck affair has proven to be one of my surprises on this rewatch. I still think Pace and Friel have a great chemistry together, and that scene in the pilot where the wall separates them continues to hold a grip on my tear ducts, but it still seems like a lot of it remains dependent on dumbstruck grins and Ned acquiescing to every one of her wishes. This episode does however give them legitimately serious reasons to have a conversation*, using Lefty Lem’s ability to hold her hand when Ned cannot as impetus to discuss just where their relationship is going if they can’t touch each other – and if Chuck is going to continue sending pies to her aunts.

*And God bless Emerson Cod in these scenes – disbelief that they’d address their relationship difficulties in a prison graveyard, increasing frustration and rolled eyes in being trapped in the backseat as they hash out their difficulties as a couple, and finally throwing up his hands and shoving them aside to kick down a door. Wonderful building reaction, and wonderfully played by McBride.

And that’s just one of many questions set up in this episode. Will Chuck keep sending those pies, especially now that she knows who the courier is? Will Olive’s newfound affection for Lily and Vivian keep her lips sealed? How far are the aunts willing to go from their familiar surroundings? And will devices such as beekeeper suits always be enough to keep Ned and Chuck together? Honestly, after these four episodes, I’m happy to follow it to whatever conclusion it reaches.