Requiescat in Pace: The Playboy Club

We’re a few weeks into the fall 2011 television season, and the axes have already been falling across the networks as new shows debut to scorn and indifference. CBS’s How to Be a Gentleman lost so much of its Big Bang Theory lead-in that it’s exiled to Saturdays to run out the string (replaced by Rules of Engagement, in the cruelest cut of all). The stars of NBC’s Free Agents are now free agents themselves after four dismal episodes, and ABC’s Charlie’s Angels have ascended to bad drama heaven thanks to the same. And after receiving some of the most vitriolic reviews I’ve ever read from luminaries like Dan Fienberg and Todd VanDerWerff, the CW’s H8R was taken out behind the shed and had both barrels put through its insufferably smug face to the accolades of sane people everywhere.

Leading the cancellation pack was The Playboy Club, NBC’s attempt to snag a piece of the Mad Men accolades by telling a story of mob intrigue and female empowerment set amongst the bustle of 1960s Chicago’s hottest nightspot. The Playboy Club was the only one of the recently culled shows I cared enough about to watch and write about, and at the time I was not impressed. As memory serves, I called it “a dull, scattered mess that bogs interesting elements in wooden writing and undeveloped plots… just not a good pilot or a good episode of television.”

However, I also acknowledged at the time that I wasn’t going to base my overall opinion on just one episode – especially a network-retooled pilot – and said that I was going to give it my usual “televitmus test” of four episodes to see if it got any better. Now that it’s not going to get that fourth episode, I decided that I’d still sit down to watch the subsequent two it did get and see if the show might have found its footing with more time.

The short answer? No, no, no. Long answer? The episodes “The Scarlet Bunny” and “A Matter of Simple Duplicity” not only continued everything I disliked about the initial pilot, but were infested with terrible writing and limp performances to the extent that the well was poisoned beyond recovery. I went into those two episodes keeping the most objective view I could, but even from that objective view The Playboy Club‘s subsequent outings were a manifestly unpleasant experience I’d be hard-pressed to recommend even under duress.

I might be sounding somewhat unkind – especially considering the show’s already been canceled – and I think a large part of that is because the episodes completely sabotaged my hopes for how it could become a better show. I argued at the time that I thought the show could improve if it spent some time focusing on the stories of the Bunnies and their rationale for doing the work they did, as opposed to Nick Dalton* and his political ambitions/organized crime roots. And it seemed like we were going to be getting those – we learned Brenda had a strong desire to be a property owner, Janie had a troubled past including an abusive husband, and Alice was starting to have a fair share of inappropriate thoughts about Maureen during a photo session.

*Yes, I’m still doing this. The show never stopped, I don’t intend to either. I actually counted it three times in three minutes during “The Scarlet Bunny,” which I believe means he appears if you happened to be watching in front of a mirror.

So it earns praise for including these scenes – and I strip that praise away almost immediately, because these scenes were flatter than a reject from Bunny auditions. Both Naturi Naughton and Jenna Dewan delivered their revelations to Maureen in scenes that lacked any sort of pacing, as if they were just running through their lines in a hurry to get to the reassuring hug at the end of it. Heard certainly didn’t add much to the scenes either, and it seemed like she was just asked to sit there and look sympathetic. It was a little better when dealing with Alice’s hidden sexual orientation, but that could be because they both included Sean Maher in those interactions and because she tended to say more with her facial expressions than her words. And even those scenes were hurt by the fact that the music played over these interactions was overtly mawkish, forcing an emotional weight the Bunnies never quite delivered.

In fact, that was the biggest problem with The Playboy Club in the long run – it was a show to which subtlety was an foreign concept. Besides the aforementioned mawkishness during the Bunny confessionals, the musical cues were unreasonably tense during Nick Dalton’s conversations with virtually everyone, and it transitioned to every commercial break with a dramatic sting. Whenever Nick Dalton and Maureen discussed the murder from the first episode, they seemed to repeat the events and consequences every single time. Similarly, Carol-Lynne and Maureen had the conversation about Maureen’s apparent tryst with Nick Dalton at least twice an episode, and it always ended with the same contrived glares and worried looks respectively. Most painful were the groan-inducing moments designed to hammer symbolism into viewers’ minds, such as at the close of the second episode when Maureen hid the incriminating members’ key of the mob boss in a jar of “vanishing cream.”

But delivery isn’t as important if you’ve got a good story to tell, right? Well, that didn’t work out so well for them either. For a show that claimed to base itself heavily on female empowerment, every bit of its pro-Bunny message was telling rather than showing. The second episode gave us Bunnies competing to be a centerfold, giving their beauty pageant answers to the show’s hilarious Hef impersonator,* and failed to make them ambitious enough or catty enough to make it entertaining. The third was even worse, with the backlash of a journalist going undercover to dig up dirt on Playboy and the Bunnies that was nothing but a forty-year-old axe being ground against Gloria Steinem. Carol-Lynne offered a tearful speech on what the club did right near the end of that, but you couldn’t take one iota of it seriously because the conflicts and the characters felt so insubstantial.

*The show only used Hugh Hefner’s voice in the pilot episode, and while it was only used briefly in the next two episodes I found it utterly laughable. Not as bad as Teddy Chaough’s RFK from season four of Mad Men, but still pretty bad.

Oh, and we haven’t even gotten to my original problem with the show: NICK DALTON. I tried, I honestly tried, to get past my distaste for Eddie Cibrian, and it was going relatively well. His performance continued to be bland and unengaging, but no more so than anything else. Mostly, the problems came from the muddled storytelling of his political campaign and the mob murder, with more of the aforementioned repeated conversations and a lot of veiled threats from Nick Dalton’s former mob associate (a remarkably unmemorable Troy Garity). I knew I’d never buy him as a leading man, but he was sinking into the general apathy of the show rather than being its deal-breaker.

But that all changed in the third episode, after Sean (revealed to be a political strategist who gets involved with Nick Dalton’s campaign) fixes him up with a society figure to be his Jackie Kennedy for the voters. They enjoy some generic conversation, and then when the music strikes up she suggests they dance. 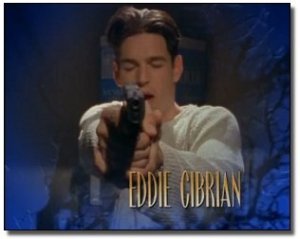 This image still better than any image of his dancing.

And what do we learn from this scene? Eddie Cibrian must not dance. Eddie Cibrian dancing is the show-killer. And it wasn’t just dancing, it was white guy dancing. Painfully awkward white guy dancing, with an oily smirk never once leaving a face that grew more punchable with every out-of-step twist. At that moment, every iota of objectivity bled away from me and I realized this character was beyond any form of redemption. It made me pray that one of the many cartoonishly menacing mob associates seen lurking to the side would walk up and put a round through his head right on the dance floor.

What was especially frustrating was that after this point, when all hope had died, something weird happened. After depicting the founding of Chicago’s branch of the Mattachine Society, we discovered Sean’s motivations in setting Nick Dalton up with Frances wasn’t just because he was being savvy – it was because the latter was a lesbian herself, and needed a public relationship as much as he did. And when she met Alice, we saw some very suggestive glances exchanged between the two, signs of a clear attraction that could complicate the personas both worked very hard to cultivate. I was literally taken aback, as the thought entered: Wait – do I see a potentially interesting plot point here?

But by that point, it was too late to care – and all I could think was how much more I’d rather watch a show starring Sean Maher as a 1960s political operative juggling campaigns and his concealed homosexuality than the dreck I’d sat through for close to three hours. It showed its potential and then threw it away almost immediately in favor of repeating itself, using the mythos of its subject matter to disguise the fact that it had nothing to say. The Parents Television Council will certainly be claiming this as a trophy for their mantel, but it didn’t die because it featured objectionable content – it died because it was an awful, awful show.

RIP, The Playboy Club. I wish I could say you’ll be missed.

The Mad Hatter of media criticism. Co-founder of This Was Television, contributor to The A.V. Club, founder of A Helpless Compiler and The Lesser of Two Equals.
View all posts by Les Chappell →
This entry was posted in TV Criticism and tagged A Matter of Simple Duplicity, Amber Heard, cancellation, Eddie Cibrian, Hugh Hefner, Laura Benanti, Naturi Naughton, NBC, Nick Dalton, Sean Maher, The Playboy Club, The Scarlet Bunny. Bookmark the permalink.