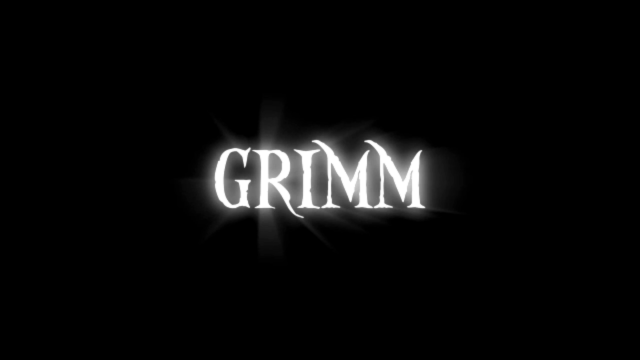 As I’ve mentioned before on the blog, I’ve been a resident of Portland, Oregon for a little over three years now. There’s a multitude of reasons why I live here, most of which I described in my Portlandia review from a few months ago, but suffice it to say the culture and climate of the city is a unique one that I wouldn’t trade for anything else. As such, I’m supportive of anything that benefits the area and I really appreciate the idea of a television show filming in Portland – beyond taking advantage of a unique setting for storytelling purposes, it also has the real-world effect of creating jobs and pumping a lot of money into the local economy.

However, even with that bias built into me, it’s not enough to make me say I liked NBC’s new Portland-set drama Grimm very much. If ever a show could be said to live up to its title, Grimm certainly does in its pilot episode, weaving its combination of police procedural and supernatural elements together in a fashion that’s ultimately bleak and kind of uninteresting. Yes, the show takes full advantage of the lush settings of the Pacific Northwest and the intrinsic weirdness they provide, but so far it’s failed to introduce anything beyond that to attract my attention. 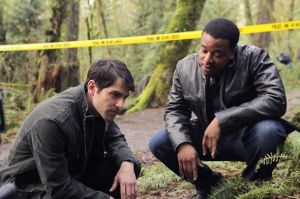 Grimm‘s contemporary fairy tale centers around Nick Burkhardt (David Giuntoli), a Portland police detective whose plans to propose to his girlfriend are being thrown off by strange visions of normal people morphing into monsters. It only gets more complicated when his aunt Marie visits, revealing that she’s dying of cancer – and is subsequently attacked by a monstrous figure wielding a scythe. As it turns out, all the creatures of fairy tale myth actually exist, and she is a member of a secretive society known as “Grimms,” humans with the ability to see those creatures and keep the world safe from their influence. With Nick’s own Grimm abilities manifesting, he finds himself tracking down an apparent “big bad wolf” who has a proclivity for kidnapping and brutally murdering girls in red hooded outfits.

Did any part of that last paragraph make you snicker at its innate silliness? I certainly did – which gets to one of the biggest problems Grimm has, in that as a show it has virtually no sense of humor. It takes the idea of monsters running around in everyday life to a more serious extent, with a haunting score and quick cutaways to beings lurking in the shadows, but the longer it does this the less interesting it starts to feel in its execution. There’s almost no attempt to question what’s happening, recognizing any absurdity in the situation, or even cracking jokes to break the tension. There’s a bit late in the episode where Nick asks if he needs silver bullets, and his reluctant partner/reformed monster Eddie (Silas Weir Mitchell) asks “Are you an idiot?” but by that point it almost feels atona. 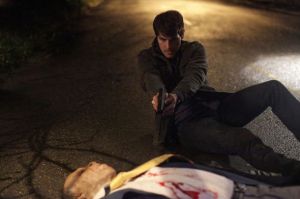 This isn’t to say I expected the show to be a ridiculous camp fest with over-the-top reactions – the original fairy tales get pretty dark when you read them closely – but you do need something to lighten the mood. As I discussed with Cory Barker and Andy Daglas on our earlier podcast, one of the biggest problems with The Walking Dead is the fact that it has absolutely no form of comic relief, only the despair of facing the end of the world, and while Grimm‘s certainly not as crushing it suffers from the same lack of charisma. It’s not impossible to add this – shows like LOST, Battlestar Galactica and Buffy the Vampire Slayer* all balanced fantastical elements and dramatic stakes with a natural lightness of tone – and it seems to be trying with Eddie, but it doesn’t feel natural at all.

*Speaking of Buffy, it’s worth mentioning that Grimm is co-created by David Greenwalt, who was co-executive producer on that show and co-creator of its spinoff Angel. Hopefully he can apply lessons of those shows going forward.

Perhaps it wouldn’t be so noticeable, except for the fact that nothing in the show so far registers enough to distract from its humorless austerity. As a leading man, Giuntoli is unremarkable bordering on wooden, greeting the majority of the otherworldly occurrences with the same disbelieving stare, and neither Bitsie Tulloch or Russell Hornsby pop as his girlfriend and partner respectively. The storytelling is fairly rocky, with speeches that are delivered with little import and feel stereotypically cryptic (“There are things you don’t know… This is no fairy tale… the stories are real”). And the production values are also not great – besides the aforementioned constant darkness, the camera work in action scenes is very choppy and the monster CGI borders on silly. 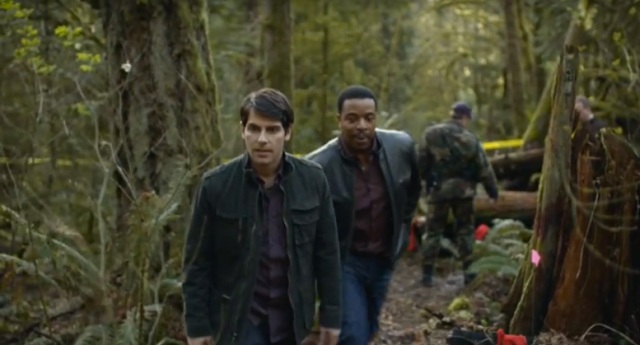 So am I going to write Grimm off after this? Surprisingly not. It wasn’t executed well but there was nothing that was offensively bad – unlike some other pilots I’ve seen this season – and I feel like it’s not terribly far from improvement. Portland does look terrific in the show as the production team makes good use of its winding trails and thick moss-shrouded forests, to the point that it’s not a stretch for them to make the atmosphere feel both magical and Gothic at once. As I mentioned, Weir Mitchell (who I quite liked in his minor role as a copycat killer in Dexter season 2) is at least willing to inject humor into the story, and if future episodes build on his introducing elements of the fantasy world to Nick it might persuade the latter to lighten up a bit. And there’s also glimpses of a big picture in the last five minutes, when Nick manages to fight off a second attempt on his aunt’s life and we see the storybook monsters could have a dangerous level of organization.

Will the show go this direction in future episodes? Will it even have the chance to do so, given that it’s not only on NBC on Friday nights, but airing directly opposite more established programs Fringe and Supernatural that already hold its potential audience? I don’t know, but for the sake of my adopted hometown and a few glimpses of potential, I’m willing to give it the benefit of the doubt.