Televitmus Test: Once Upon A Time

(Editor’s note: Now that we’re a few episodes into the fall season, it’s time for me to apply my test of four episodes – previously described as my “televitmus test” to some of the new shows I’ve taken the time to watch. I’ll describe how the show has built on the things I liked about it starting out, whether or not it’s continued the things I disliked, and what’s surprised me in either a good or bad way, and pass my final judgment on whether or not I’ll keep watching. Next up: ABC’s Once Upon a Time.)

It’s probably due to its ownership by the Walt Disney Company, but of the major broadcast networks it’s always seemed to me that ABC is the only one you could potentially call whimsical. While FOX and NBC deal with their fantasy elements in a darker vein (Past Life, Grimm) and CBS is boring when they try (A Gifted Man), ABC seems to still believe there’s a way to inject magic into prime-time television. This is the network that put Twin Peaks on the air, gave LOST six seasons to follow its story down the rabbit hole (or hatch if you like), and also had the good sense to green-light the wonderfully charming Pushing Daisies. Obviously they’re as concerned with making money as any other network, but if a showrunner has an idea that goes against the grain, ABC seems the first place to pitch the idea.

And Once Upon A Time seems like it fits exactly in ABC’s wheelhouse. It’s a drama that’s not only set in the fantasy world the network’s parent company built an empire on, but also draws on the experience of former LOST writers Edward Kitsis and Adam Horowitz to build a much deeper world within that setting. And to an extent, Once Upon A Time succeeds in being what it wants to be, which appears to be what everyone wants – delivering ratings high enough to make it the breakout show of the fall, and broad enough for it to be touted as the second coming of Wonderful World of Disney.

But is it a good show? Well, four episodes in it hasn’t done anything to move further past guilty pleasure. It surmounts a poor pilot to make use of its actors and source material, but it’s still not good enough or convincing enough to provide the true suspension of disbelief such a project requires. However, what it has done has given me a bit of confidence it may yet reach that mark, or at least keep on the level enough that I enjoy catching up with it.

Much like NBC’s aforementioned Grimm, the central concept of Once Upon A Time is that all the creatures of fairy tales are real – however, it goes a step farther and shows that the Enchanted Kingdom they dwell in is real as well. At the wedding of Prince Charming and Snow White (Joshua Dallas and Ginnifer Goodwin), the Evil Queen (Lana Parilla) disrupts the festivities with an announcement that she will bring an evil curse upon the land as punishment for an unnamed slight. Sure enough, immediately before the birth of the couple’s daughter Emma, the black magic sweeps through the kingdom and transports its inhabitants to our world. More specifically, a small Maine town known as Storybrooke, where the residents live with no knowledge of their past glories and where the Evil Queen smugly rules as the town mayor Regina Mills.

This status quo is uprooted by the entry of Emma Swan (Jennifer Morrison), Snow White and Prince Charming’s daughter who was teleported to safety before the implementation of the curse. Now a bail bondsman based out of Boston, she is discovered by Henry (Jared Gilmore), the son she gave up for adoption who was subsequently adopted by Regina. Having discovered the truth in a storybook given by his teacher (the former Snow White) he decides that she’s the one to break the curse and brings her to Storybrooke. Once there, she begins to interact with the town’s population in a variety of ways, and her interactions slowly start to trigger new connections and memory flickers in the stranded characters.

I didn’t have a chance to write a review of the Once Upon A Time pilot by itself save a few tweets during viewing, and that’s a good thing because it would not have been a kind one. I thought the pilot was really kind of horrible in its execution, as every single scene in the fairy tale world (and some of the real world ones) filled me with unintentional laughter start to finish. The dialogue was cliched, the effects better than expected but still somewhat mediocre, and so many parts of the story made me bite my tongue to keep from questioning it*. It struck me as a show that would rely on style over substance, trying to read from its storybook in a voice that would enthrall instead of educate. (And it also used the phrase “happy endings” so much I’m convinced ABC saw an opportunity for some cross-promotion.)

*I shouldn’t be too surprised by this one, given that Horowitz/Kitsis were not only writers on LOST but also Tron: Legacy. And if ever I had to suspend my disbelief to enjoy a film, it was then.

But in the interest of fairness (and also from some residual Pushing Daisies affection) I gave it a few more installments to see if it could get better. And surprisingly, it did. It’s settled into a consistent structure for each episode, as the episodes show Henry and Emma trying to uncover a character’s fairy tale past while flashbacks show us what that character’s life was like in the Enchanted Kingdom. At the same time, they’re also working to build the show’s universe with recurring elements such as the tension between Emma and Regina, and Emma’s own uncertainty about playing a role in her son’s life. As the episodes have gone on, the show’s writers have been getting a better idea of how to integrate its weekly fairy tale with the arching narrative, and give the episodes a thematic connection – even if they continue to use dialogue that’s schmaltzy bordering on insufferable at times and lean on plot twists that could generously be called silly.

The scenes in the fairy tale world continue to be a weaker part of the show – a bit too conventional in its Disney-style that I still snicker unintentionally on several instances – but I do appreciate that it’s moving past the pilot’s impression that this world was a static one of “happily ever after.” The second episode “The Thing You Love Most” showed that the Evil Queen had more emotion and hesitance over her decision to release the curse than was previously let on, and the third episode “Snow Falls” was legitimately engaging in depicting Snow White and Prince Charming’s initial relationship as somewhat more Robin Hood than Seven Dwarves. If we want to be invested in this world, its stories need to be flashy enough to distract us or nuanced enough for us to want to see them, and while the former hasn’t worked (some really terrible troll masks in “Snow Falls” in particular) the latter is doing enough necessary groundwork. 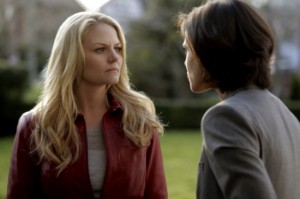 It’s also easier to forgive the show for many of its sins because it’s assembled a truly interesting cast to play these fractured fairy tale characters. I liked Jennifer Morrison a lot on House, and after so many years playing the moral compass on that show it’s refreshing to see with material that allows her to be a more proactive character – one who’s not afraid to take a chainsaw to an apple tree to prove a point. Ginnifer Goodwin, in many instances the best part of Big Love, has two sides to play here – assertive and regal as Snow White, bookish and timid as Mary Margaret – and manages to make them believable in each world’s context. Lana Parilla (who I last saw in an utter non-entity supporting role on Spin City) is chewing scenery with entertaining gusto, as is Robert Carlyle’s Rumpelstiltskin whose manipulative deals in both worlds appear to be a driving engine for the long-term story. There’s also a lot of scattered bit players with potential, though some of them (like Giancarlo Esposito* as the Magic Mirror) haven’t gotten enough screen time to leave an impression.

*This one is especially painful for Breaking Bad fans when you watch Regina intimidate his real-world equivalent of newspaper editor to stammered excuses. Bitch, don’t try to school Gus Fring – you might have your apples, but when it comes to poisoning your enemies, he will always be on top.

There is one big problem with the show, and it’s one I’m prepared to devote an entire paragraph to: I fucking hate Henry Mills. I don’t know if you can blame Jared Gilmore for not doing enough with the material he’s given, or being given such schmaltzy material that there’s nothing no one can do with it, but he fills me with annoyance levels I haven’t felt towards a child actor since Freddie Highmore in Charlie and the Chocolate Factory. They’re probably going for youthful optimism in how hard he pushes Emma and how convinced he is in the truth of the fairy tales (and I admit he’s necessary to push things forward) but every scene he’s in I want him to go home as fast as possible.

Other than that, there are plenty of other questions that keep popping up, and while some of them – like just how much control Rumpelstiltskin’s Mr. Gold has over the town – are clearly long-term plots in development, others make the world feel inconsistent to annoying extents. If everyone in Storybrooke has access to the Internet, cell phones and credit cards, how is it the outside world is entirely unaware of its existence? Is Regina the only person who is entirely aware of her fairy tale past and that’s why she’s pushing back so hard against Emma, or is it because she just sees a threat to her power? Children are clearly being born in Storybrooke as “The Price of Gold” demonstrated, so can you really call it “static?” And if so, why didn’t Regina adopt someone inside the town as opposed to turning to Mr. Gold, who plucked Henry from Arizona? I’d ask them to explain these things, but I do have a hunch that the show would get worse if they did (going once again to the old LOST comparison) and the annoyance level is more a needle than a sword at this point. 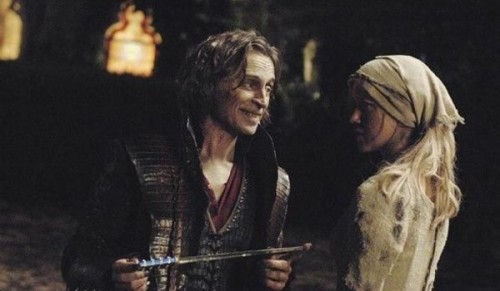 So it’s not a great show, and maybe it’s not even a good show, but I have to admit that I do like it for what it is. Maybe it’s because Sunday nights have been full of serious drama for so long – Boardwalk Empire, The Walking Dead, Homeland, Dexter, Hell on Wheels at this moment in time – it actually comes as something of a relief to see there can still be a show with its head in the clouds. There’s people here I like watching and a story I’m getting interested in, even if both occasionally make me laugh without meaning to. Once Upon A Time has its share of problems, but it’s also doing something that other shows aren’t, and does it well enough that I’m interested enough to give it a few more episodes.

And if it could find an excuse to drop Henry down a pit for those episodes, I wouldn’t be adverse to that at all.

1 Response to Televitmus Test: Once Upon A Time