Podcast: Best TV of 2011 (with Cory Barker and Andy Daglas) 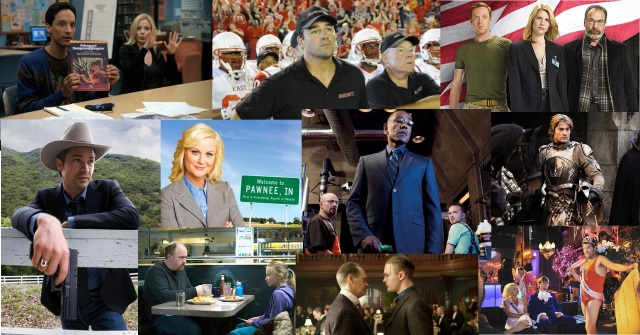 Yesterday, I teamed up with my good friends Cory Barker and Andy Daglas to discuss the worst television of 2011 in a podcast over at TV Surveillance. For those of you who had the patience to listen to all two hours of it, it was a wide-ranging discussion where we had fun excoriating many painful shows, mourned the downward spiral of many others and I discovered a heretofore unused talent for impressions.

Today, we did the flip side of the coin, talking for an even longer clip about the best television of 2011. Among the early highlights, I explain why I felt Justified made the best seasonal leap in quality of any 2011 show, Andy gets one last opportunity to talk about just how meaningful the ending of Friday Night Lights was and Cory goes into the virtues of Game of Thrones’ inaugural season. We each had a chance to opine on some of our favorite comedies, revisit our original discussion of Boardwalk Empire in the wake of its finale, see how good Homeland was at sticking the landing, and get to the show that knocks as the best show of the year. As happened last time, expect ten thousand tangents on semi-related shows, and one moment three-quarters of the way through where I have a minor breakdown and go through a multitude of impressions in five minutes.

Also, contrary to podcast impressions, I do not live in my mother’s basement. Just making that clear.

As always, you can stream the podcast over at TV Surveillance or download it from iTunes.

Happy holidays to all listeners, and I hope to bombard you with more opinions and impressions in the new year.

1 Response to Podcast: Best TV of 2011 (with Cory Barker and Andy Daglas)