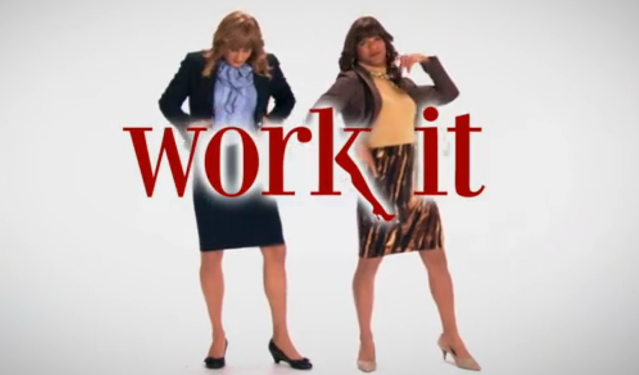 If you’ve learned anything about me from following along with this blog, you know that I have a weakness for terrible television – so much so that I’ll stick with shows I know are going to be bad for at least four episodes, and then going on to talk about said shows for two and a half hours. There’s a lot of reasons why I do it, ranging from a penchant for self-flagellation to a hope that the show will get better to simply wanting to participate in the MST3K-esque ribbing that live tweeting provides. But more to the point, I consider it something of an obligation – as I discussed with a fellow critic on Twitter last week, as someone who writes about popular culture it’s our job to find out what’s good and what’s bad, and have the steel to call it out when it’s the latter.

So as part of this public service, allow me to tell you: ABC’s Work It is awful. And not only is it awful, it’s an automatic contender for worst show of 2012 despite the year only being 11 days old. This is worse than any other comedy pilot I watched last year – worse than 2 Broke Girls, worse than The Paul Reiser Show, worse than Whitney, worse than I Hate My Teenage Daughter. Hell, I’d even go so far to say that it’s worse than American Horror Story, the show I hated more than anything else in 2011, because at least that show was trying to do something new and experimental. Here, they’re not trying anything at all: it’s flaccid, unfunny, unbelievable, and just miserable to sit through from start to finish.

Work It takes place in St. Louis, Missouri, where former car salesman Lee (Ben Koldyke) has been out of work for over a year due to the failing economy. With his last unemployment check gone and his insurance coverage lapsed, Lee jumps on an opportunity at a pharmaceutical company, only to discover they’re seeking women. So rather than trying to sell himself normally, what does he do? He slaps on his wife’s dress, a wig and some makeup, and not only gets himself hired but also manages to get his best friend Angel (Amaury Nolasco) hired on as well.

So, where do we begin with what’s wrong with this show? Well, we might as well start with the obvious: the cross-dressing. I’m certainly not opposed to cross-dressing as a method of comedy, and it has a long track record of success in films – Some Like It Hot and Tootsie wouldn’t be topping the AFI’s list of 100 best comedies if it was a bomb of an idea. And several times in television shows over the last few years, I’ve enjoyed characters who dressed in drag on a fairly regular basis. Off the top of my head, I can point to John Carroll Lynch on The Drew Carey Show, David Duchovny on Twin Peaks, and David Cross on Arrested Development as executing the idea successfully.

The difference between these performances and Work It, however, was that the cross-dressing was either a) an integral part of their character’s psychology, or b) played to the point where it was clear no one else on the cast believed it. Here, neither Koldyke nor Nolasco are even close to convincing, both being well-built men who tower at least a head over any of the women on the show, and their outfits don’t obscure it in the slightest. And when you ask a viewer to accept that these two were hired on to a position as pharmaceutical reps – where one of their coworkers overtly states that they’re only hiring women because doctors would rather sleep with them – it gets even harder to suspend disbelief.

Perhaps it wouldn’t be so obnoxious if there was anything else to hold the show together, but this is just an egregiously written pilot in every way. I don’t think I cracked a smile at any of the punchlines, be they Lee and Angel’s friend Brian* who argues that women are going to make us all sex slaves because of the “mancession,” Angel’s woes as a fast food worker or the angsty neuroses of some of their fellow pharmaceutical reps. None of the characters have anything approaching chemistry with each other, and the writing spells out every choice the characters are going to make – Koldyke at one point has to talk to himself because apparently the viewers can’t figure out he’s conflicted. And even in its musical choices, the show is lazy at best and painful at worst: watching Lee and Angel try to dance** to T-Pain is excruciating, and the montage of Lee picking through his wife’s wardrobe to the Black Eyed Peas “My Humps” might go down in history as the worst montage ever used in a sitcom.

*Watching this bit, I was reminded a little of Jim Norton’s character on Lucky Louie, who had similar rants that worked their way through racism, sexism, and various other prejudices. The difference here is that those bits clearly came out of Norton’s own stand-up and were deliberately trying to provoke. Here, it’s an attempt at edginess that just comes across as ignorant.

**Alan Sepinwall made the observation in his own review that this nightclub scene was the cheapest thing he’d ever seen on primetime, and I can’t argue with that. I’ve been to strip clubs that had more elaborate decorations.

It’s also hard to shake the feeling that the cast seems to know they’re in a project that is going to leave a very black mark on their resumes if anyone sees it. Koldyke in particular looks resigned and stressed in every scene – even when he’s not trying to apply makeup – and there’s a particular desperation to his real and fake voice that I’m certain isn’t acting. Nolasco on the other hand appears to have abandoned himself to the role, with a shameless giddiness to his drag role that indicates he’s ready to go down with the ship. None of the women working in the office gave any indication that they have personalities beyond “neurotic,” “vain” and “bitch” – I’ve already forgotten all of their names – and Lee’s wife and daughter apparently graduated from the ABC Academy of Generic Sitcom Families.

A review of a pilot should have some speculation of where you see the show going next, and when we get to that we hit the fatal flaw: I honestly don’t see how you can expect Work It to get a story a week out of this premise. Is every week going to be an adventure where Lee and Angel come this close to being discovered as men by their evil bitchy coworker, only to escape in dramatic fashion? Is it a journey of self-discovery where each week they learn something new that makes them better men with their significant others? I don’t see them going for any of these things – the entire show feels like it had one idea and built the loosest possible framework around it, and that there’s nothing else to even work towards holding it together.

And should they even try? My advice to ABC: It’s not worth it. Don’t flip it, don’t reverse it – just put the thing down. Work It is an unfunny, irredeemable show, and even with my tolerance for terrible TV I would sooner nail my eyelids to my bottom desk drawer than watch a second episode. Watch at your own risk.

The Mad Hatter of media criticism. Co-founder of This Was Television, contributor to The A.V. Club, founder of A Helpless Compiler and The Lesser of Two Equals.
View all posts by Les Chappell →
This entry was posted in TV Criticism and tagged ABC, Amaury Nolasco, Ben Koldyke, cross-dressing, Paul Lee, pilot review, Some Like It Hot, Tootsie, Work It. Bookmark the permalink.