In terms of holidays represented on television, Halloween is probably the easiest one to get a good episode out of. At its most basic level, it gives you an excuse to dress your characters up in costumes that are frequently revealing – both in terms of skin and of character – and add an additional layer of color to a typical episode (i.e., Community in season one). And given how saturated the holiday is in mystique and supernatural occurrences, it also gives you an excuse to push the envelope in terms of your storytelling, going to places that are darker psychologically or outside the normal reality in which the show operates (i.e., The Simpsons‘ epic “Treehouse of Horror” series, Community in season two).

So be honest – who wasn’t excited when they saw that Pushing Daisies was going to do a Halloween episode? A show already rich in the supernatural, with an innately unique take on its visuals and scoring? The possibilities were endless. Would we see actual zombies overtake the Pie Hole, one touch of Ned’s hand bringing to life individuals very confused about why they were standing around in torn clothing? Would we learn that Aunts Lily and Vivian are in fact witches, and turning children into birds isn’t just a neighborhood rumor? Or at the very least, would we get to see Olive dressed up as a Broadway character and Emerson dressed up as Shaft?

Well, “Girth” doesn’t deliver in terms of costumes except in one instance (which we’ll get to later) but it functions incredibly well in terms of making the show more supernatural and psychological. For the first time, we get hints that there might be more magic to this world than that in the Pie Maker’s finger; and for the first time, we get to peer into the lives of our main cast beyond simple flashbacks to see the scars left on them and the varying degrees to which they can’t let go or forget. And as an episode of the show, it continues the positive growth of previous installments and gets the chance to finally shuffle up the status quo.

The shuffling in question comes up because the instigator of the weekly investigation is none other than our scheming, lovestruck waitress Olive Snook. It turns out that before coming to the Pie Hole Olive was a professional jockey of some repute, who left the sport after her competitor John Joseph Jacobs was trampled to death by her and three others in the prestigious Jock-Off 2000 race. When one of those other competitors is likewise trampled – with horseshoe imprints so distinct the skin might as well be Silly Putty – Olive suspects she might be in danger as well and recruits Emerson to look into the affair. And her intuition might well be correct, as the trampled victim pegs his killer as none other than the long-dead John Joseph Jacobs, in black robes and on a fire-spewing horse straight from Sleepy Hollow. 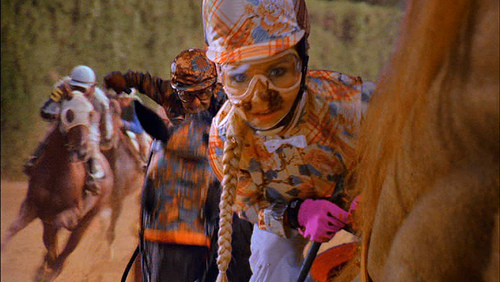 But is it a real ghost, or just someone nursing a seven-year grudge? The effects of the horse and the mysterious nature of the death keeps that possibility in the dark until the very end of the story, and the boundaries between reality and fantasy are so blurred on Pushing Daisies it’s not a stretch of the imagination that it could really be a specter. That not knowing gives this episode an edge, and it’s helped by the fact that the mystery is probably the most compelling case-of-the-week the show’s done so far: filled with several misdirections, premonitions, legitimately startling moments, culminating in a spooky chase through the forest.

That hint of dark forces certainly gives the story more of an edge, though the real strength  is that Olive instigating the case gives her more of an excuse to be involved in the episode’s procedural elements. After the successful scene outside the Pie Hole in last week’s episode put all four of the main cast together briefly, “Girth” gives us a chance to try out some new combinations of our cast, driven by Olive’s personal investment and Ned’s inexplicably excusing himself from the case early on. As such, Olive and Emerson get some good one-on-one time as they go over the case details*, hunting for clues and prying open tombs; and once Chuck joins the two of them it puts Emerson in the the wonderful role of grumpy dad keeping the peace between the two: “Bang, you talk too much and you both go wait in the car.”

*Much like Emerson’s dimly lit office, the scene where Olive hires him has some very noir undertones, the main light coming through closed blinds and a matter-of-fact tone to her voice that makes her sound like a dame out to clear her name a la Mickey Spillane. And that gives it a great juxtaposition with the Pushing Daisies aesthetic, given Emerson’s confusion on what a farrier is and his deep belly laugh when Olive reveals her horse-riding past.

The real pairing of interest here is that, for the first time, Chuck and Olive are put together in a setting without Ned to throw a wedge between them. Not that they’re anything approaching friendly, as Olive’s reveling in the sword she’s holding over Chuck’s head with the knowledge that she’s still alive and Chuck is for the first time as jumpy as her boyfriend. Much of the episode involves passive-aggressive sniping between the two about secrets and the keeping of secrets, and it’s a pleasure to see both Friel and Chenoweth playing their characters in a more active role. And when they find themselves in a common setting – and can offer a simultaneous “yay!” – we get a sign that they actually could be friends, united in their fondness for the aunts and some bourbon with a splash of Chamomile tea. (Which sounds awful to me, but whatever.)

And as Ned’s trying to work out some of his own issues, he finds himself seeking advice from Aunts Lily and Vivian in yet another entertaining pairing. You can see his childhood fear in being alone in a house he once thought haunted – not helped by how Lily and Vivian trained their birds to say they were once young boys in the presence of neighborhood children. (“Scares the willies out of them!” Vivian adds, with a grin that’s probably not doing anything to help.)

So why is Ned seeking their advice, and heading across to Couer d’Coeurson his own? Well, it turns out pumpkin pie is the one dessert not baked at the Pie Hole, as Halloween makes him “moodier than a pumpkin full of P.M.S.” in Olive’s words. That alone is a nice twist on the formula – usually it’s Christmas or Valentine’s Day that give characters excuses to feel alienated or cynical about what the holiday means. But here, much as on Friends whenever Chandler was put in the same proximity as Thanksgiving dinner, jack-o-lanterns and black cat cutouts increase Ned’s twitching quota by two hundred percent and even leads him to make excuses not to be around his beloved Chuck.

And much as Chandler’s gut reaction was tied to Thanksgiving being the holiday he learned his parents were divorcing, Ned’s Halloween aversion comes from it being the day he received concrete proof that his father was “emotionally stunted, afraid of getting close, definitely not the best at good-byes” – or as Aunts Lily and Vivian put it bluntly and gently, a jackass. It was on Halloween that young Ned snuck away from school to his father’s new address, where he discovered that his father had also moved on to a completely new life, complete with a pretty blonde wife and twin sons. It’s always been clear Ned’s damaged goods (you don’t commit accidental involuntary manslaughter at age ten without consequence) but for the first time, there’s something very human about his reticence to get close to anyone.* His weakly asking Vivian the question “Then why do I still miss him?” made me feel for him in a way I haven’t since the pilot.

*It’s good that Pace was so good at conveying the emotional turmoil Ned felt at losing his father, because the exposition turned out to be the worst part of the episode as Dale’s narration for these flashbacks was a set of rhyming couplets. They slipped this into the start of “The Fun in Funeral” as well, and here it’s much less subtle and much more annoying. The narration works when it’s smooth and clever, and here it got its feet clearly stuck in the treacle.

Ned’s reaction and realization also illustrate just how cohesive this episode is – it might actually be the most unified yet in terms of how each character’s storyline ties to the idea of ghosts of the past. John Joseph’s ghost is the specter hanging over the episode, but it’s his mother’s grip on the past that’s driving the action. Ned for the first time realizes that hanging onto his father’s memory is no longer helpful for the way he lives his life, and comes to some realization on how Chuck’s having a similarly tough time moving on from hers. Olive finds the strength to move on from the dark cloud on her career, and makes a gamble for the future by planting one on Ned’s lips.

And even though Jacobs wasn’t the headless horseman Olive feared, there is still one ghost – or rather, one dead person disguised as a ghost – as Ned recognizes his own pain in Chuck and allows her to finally see her aunts for a 2 a.m. trick-or-treat. You can hear the joyful quaver in her voice as she holds out the candy barrel, see the respective small and wide smiles on Lily and Vivian’s faces at their unseen visitor despite the late hour, and feel the hope from Ned at finally trying to move forward. Yes, it’s a somewhat schmaltzy move, much as they’ve done to end previous episodes, but this time? It absolutely feels like they’ve earned it. Happy Halloween indeed.